This is part of the materials used in the Solid Earth class.

Minerals are the basic building blocks of Earth materials and are defined as naturally occurring, inorganic solids with definite chemical compositions and regular, internal crystalline structures. Minerals are important constituents of rocks, and recognizing distinctive minerals will greatly improve your ability to recognize rocks (coming up in the next 2 weeks). Approximately 4500 different minerals have been observed in nature, but there are relatively few common rock forming minerals and important ore minerals.

The following notes are gathered during my mineral class in 2019 Fall and the preparation for the mineral identification lab.

What is a mineral?

A mineral is a naturally occurring solid with a highly ordered atomic arrangement and a definite (but not fixed) chemical composition. It is usually formed by inorganic processes. Rocks are aggregates of minerals (or non-minerals). The minerals present in a rock are dependent on the intensive properties of the system:

Properties for Identifying Minerals in Hand-Sample

Color must be used carefully because differences in grain size, minute amounts of impurities and other variations may cause changes in a mineral’s normal color. Many minerals are the same color and a single mineral can be many colors.

** One problem with using mineral color to identify a mineral is that it is often highly variable for a given mineral. Impurities, crystallinity, and lots of factors may have major effects. The color of a finely powdered mineral, known as its streak, however, does not vary much.

Luster is the way a mineral reflects light. There are two main classifications of luster, metallic and nonmetallic. 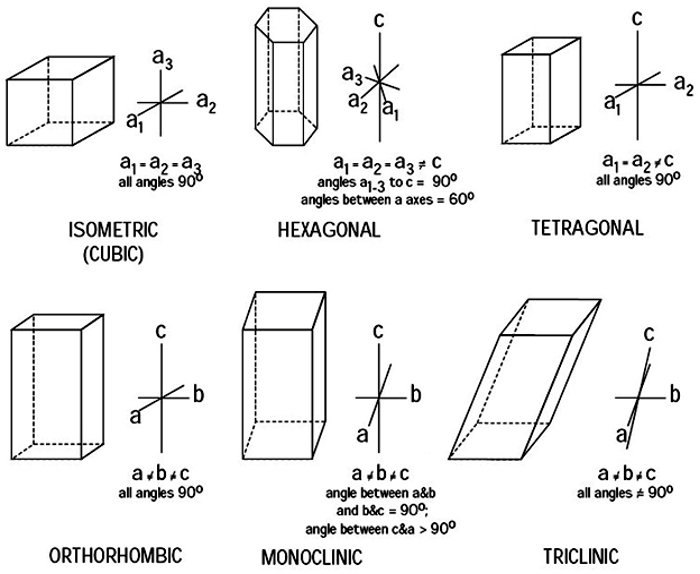 If you can see many individual grains or a mass that show no recognizable arrangement, identify it as one of the following aggregate specimen structures:

Specific Gravity (SG) is the ratio of the density (mass of a unit volume) of a substance to the density of water.

Compared to the minerals above, fingernails have a hardness of 2.5, a penny is 3-4, knife blades are about 5.5, and streak plates are about 7.

Cleavage is the tendency of a mineral to break along a specific direction or plane. It is a break between planes of tiny particles in a mineral’s internal structure. Some minerals have no cleavage; some have only one direction of cleavage; others have two or more directions, producing surfaces that are not parallel. Each cleavage direction may produce many parallel surfaces. When there are two or three directions, it is important to note whether they are perpendicular of oblique to each other. Count every cleavage on a single crystal that is not parallel to one already counted.

Any break which is not a cleavage is called a fracture. A fracture is not predetermined by the arrangement of atoms in the mineral and is usually irregular.