Pseudopotentials help researchers to release the calculation workload by reducing the electron number involved in calculation, focusing on the relevant valence electrons, reducing the nodes of wave function, which results in a relatively simple Fourier series when describing the atom. It has a cut-off radius $r_{c}$ and beyond this region, the real and pseudopotentials shows excellent identity and gives good transferability as well, which means the pseudopotentials should resemble the valence obits of various atoms in various chemical environment.

When solving the Schrodinger equation $(T+V)\varphi=\epsilon\varphi$, where the $V$ is the sum of self-consistent core potential and valence potential, the solution would be hard to obtained as the complex potential $V$ has strong wiggles, especially in the core region. So pseudopotential $V_{l}$ is needed to substitute the real potential $V$ with lots of wiggles to solve this Schrodinger equation $(T+V_{l})w_{l}=\epsilon w_{l}$ , where the $w_{l}$ is wavefunction obtained from pseudopotential.

For norm-conserving pseudopotentials, the total charge number inside the cutoff region $r < r_{c}$ of modified wavefunction $w_{l}$ should be the same as that of original wavefunction $\varphi$. The pseudopotential generated in this method could be used for wavefuntions in both real and reciprocal space, and make it possible to compare with experimental data. In addition, some approximations were used to simplify calculation like frozen core approximation to individually calculate the charge density of core and valence region and get the sum, $\rho(r)=\rho_{c}(r)+\rho_{v}(r)$.

Property 1 is quite important when we take the whole periodic table into consideration.

Property 2 ensures the identity so that we could use the pseudopotential solve the Schrodinger equation.

Starting from the Schrodinger equation,

the second term is Hartree potential and the third term is exchange-correlation potential.

The orthogonalized-plane-wave(OPW)-like pseudopotential has an important identity

where $R$ indicates the reference state, $\varphi$ is the solution of Schrodinger equation at energy $\epsilon$. So the atomic scattering property is well preserved.

The Schrodinger-like equation of the valence electrons is,

where $r_{cl}$ is the referential core radius for quantum number $l$. The $f(x)$ is the cutoff function which ensure the smoothness of the potential.

The choice of cutoff functions:

That is a numerical solution that will precisely fit the real condition, in this essay $\lambda=4$ and in some others mentioned that $\lambda=3.5$, and both of them show good identity when $r>r_{c}$.

A nodeless solution that would be obtained is $w_{1l}$, solving radial Schrodinger equation with this potential by changing the parameter $c_{1}$ in this equation and the $w_{1l}$ can be normalized with a multiplicative constant $\gamma_{l}$,

Then, we need to introduce the norm-conservation concept into the pseudopotential by modifying the wavefunction $w_{1l}(r)$, adding an adjustment within the core region to get $w_{2l}(r)$

where $\delta_{l}$ is a phase shift generated from the potential and shows how it shifts compared with $w_{1l}$ and it could be obtained by solving the quadratic equation of the normalization of $w_{2l}$,

Thus, the final pseudopotential $V_{2l}^{ps}$ with a nodeless eigenfunction $w_{2l}$ at eigenvalue $\epsilon_{l}$ could be obtained by inverting the Schrodinger equation,

Example in the paper

From the figure, we can see how identical they are when $r>r_{c}$. 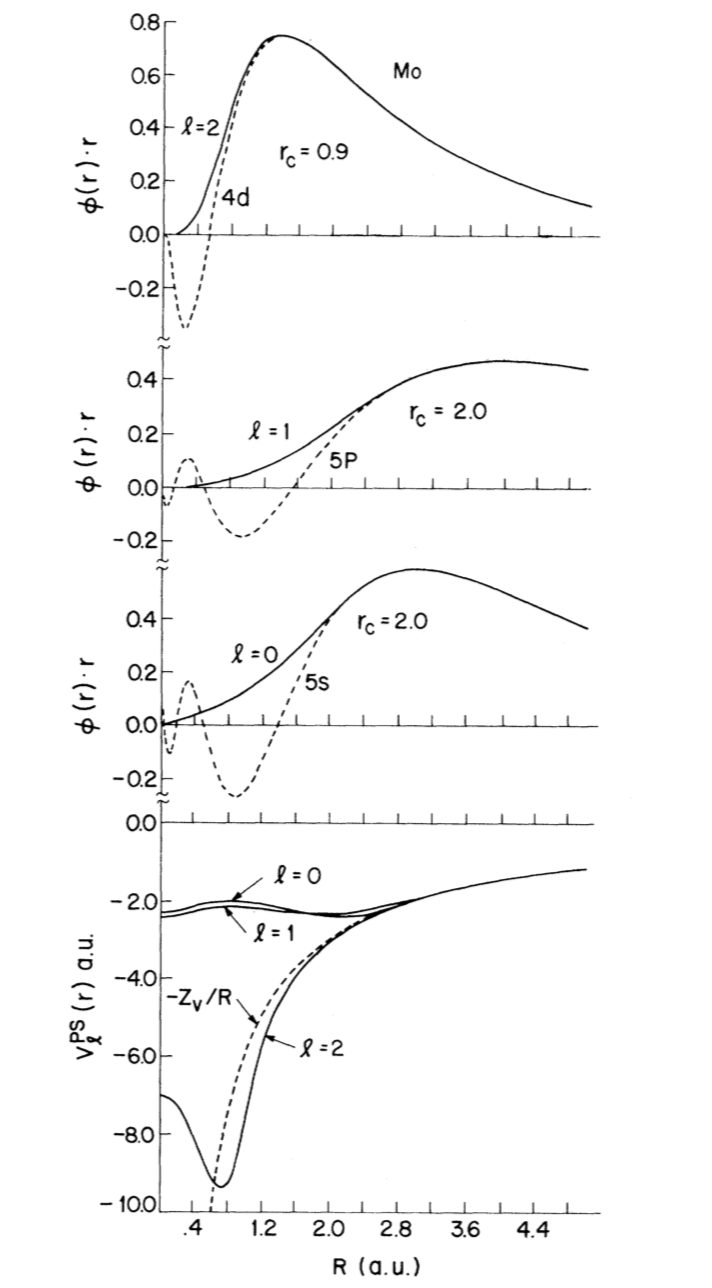 The logarithmic derivatives of wavefunctions shows the transferability by how identical they are. 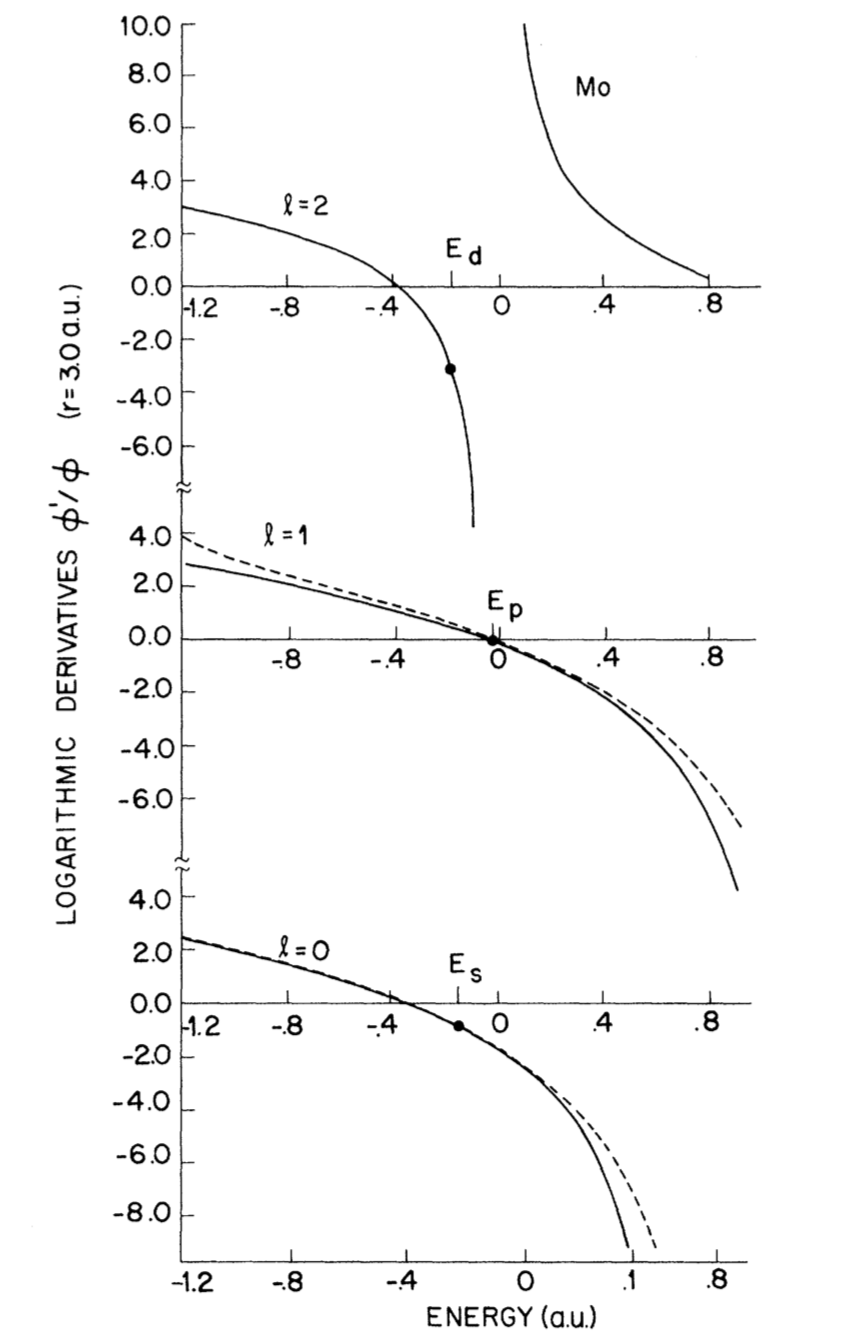 By comparing Figure 1 and Figure 2, the smaller the cutoff radius, the better identity the logarithmic derivatives will have, and the better transferability will be obtained.

Pesudopotential is a useful method to replace the hard coulomb potential by smooth pseudopotential, which means the core and whole electrons will be replaced by pseudo core and valence electrons in order to simplify calculation problems.

When the cut-off parameter $r_{c}$ approaches radius of atom $R$, the transferability of the obtained pseudopotential will become better. However, when $r_{c}$ is close to $R$, the wiggle of due to the orthogonality of core wave-function will reduce the accuracy and efficiency of calculation. So the balance between the smoothness and transferability of pseudopotentials should be taken into consideration.